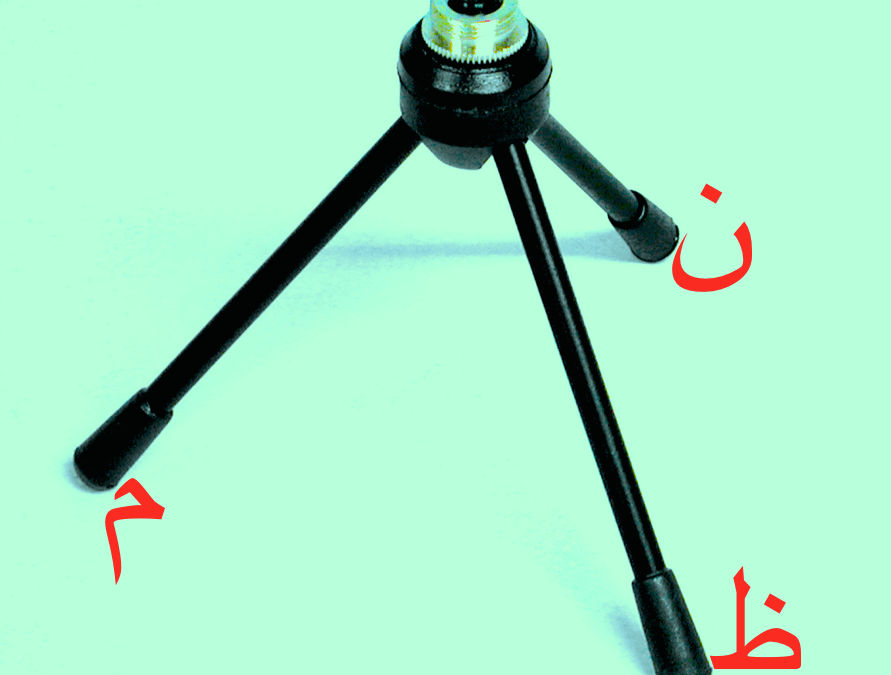 This article is a sister article to the earlier 101 articles treating features of word-formation Hindi has inherited from Sanskrit. Features discussed in those articles are: vowel sandhi, vowel gradation, prefixes and suffixes. In the present article students and speakers of Urdu and Hindi will find a short introduction to the methods the Arabic language employs in the derivation of different words from a root. As Arabic is a non-Indo-European language, its concept of the root differs considerably from that encountered in Sanskrit and related Indo-European languages, where roots could be compared to monosyllabic eggs from which various meanings emerge through suffixation, prefixation and gradation of the root-vowel. While Sanskrit roots are like eggs, Arabic roots are more like tripods. How so? This shall be explained in detail below.

Anything that has to be able to stand on its own needs at least three points of support. This is exactly what Arabic grammar does to produce roots that offer support for various derived forms. Nearly all of the Arabic roots consist of three letters, which act like the three feet of a tripod providing stability for different morphological devices. These roots are therefore usually called triliteral, from Latin tri, three, and litera, letter. This is the reason why so many of the basic Arabic words used in Hindi and Urdu consist of three consonants. E.g. तरफ़/طرف , सफ़र/سفر, शकल/شکل, ग़लत/غلط, फ़र्ज़/فرض, फ़र्क/فرق, फ़र्श/فرش, etc.

There are two other aspects of Arabic in which the number three crops up. The first is not closely related to the mechanisms discussed here and only mentioned as a point of interest. The sound inventory of the Arabic language, so rich in consonants, surprisingly only contains three qualitatively different vowels: a/ā, i/ī and u/ū. In the examples below, the reader will be able to see for him- or herself how no vowel other than these three turns up in any of the words discussed. The second aspect, in which number three plays a role, is the transformative processes involved in the derivation of words from a root. There are three basic concepts of transformation involved in Arabic nominal derivation: 1. lengthening, either as the doubling of a consonant or lengthening of a short vowel; 2. removal and 3. addition, either as prefixation or infixation. Combining the three sounds of the root with the three concepts of transformation results in the ten different stem classes of the Arabic derivational system, of which nine are to be found in Urdu and Hindi.

Below is a list of the nine classes found in Urdu and Hindi. Along with a description of the derivational process(es) involved and its original meaning in Arabic, a short-form of the stem is given to clarify the distinctive structural features of the resulting stem. The three root consonants are indicated by the numbers 1,2 and 3 respectively. The vowel a, which is in Arabic, as in Hindi the vowel अ, an inseparable part of any letter indicating a consonantal sound, therefore called the inherent vowel, is represented by dashes between the numbers. In case one of these elements undergoes lengthening the short-form of the structure indicates this by the symbol in question being written twice. Removal is naturally indicated by removing the symbol. Added elements are written in italics.

Each of the classes described below contains a number of different forms. Apart from the verb and verbal noun they also contain two participles, one active and one passive, which frequently turn up in Urdu as nominals.

The passive participle is characterised by prefixation of ma to the root, from which the inherent vowel following the first element has been removed, and infixation of long –ū- between element 2 and 3. Its structure is therefore: ma12ū3. When the resulting form is trisyllabic the infix –ū- is not employed.

All the participles, be they active or passive, belonging to classes other than class I will prefix mu- to the stem.

The description of each class is illustrated by examples of the different formations for which it acts as a base. Note that words forming the most common part of Urdu vocabulary are principally derived from classes I, II, III and VIII, so that not all classes can be illustrated with an equal number of examples. The roots discussed below in the examples are: अलक/علق, अलम/علم, असल/اصل, इल्म/علم, कबल/قبل, करम/کرم, सफ़र/ سفر, तलब/طلب, नज़म/نظم, नज़र/نظر, नसर/نصر, सवफ/صوف, हज़ब/ھذب and हसल/حصل. Not always does the root on its own have a definable meaning. If the definition is missing from a root, then this means that it is usually only used in derived forms and not in its original or simplest state.

Class I: simple root. Meaning: basic meaning of the root.

Structure: 1-22-3. From नज़म/نظم, the past participle मुनज़्ज़म/منظّم , organised or systematic, is formed. Note how the expected infix -ऊ- is absent from the form due it being trisyllabic. Using the nominal prefix त-, the root हज़ब/ھذب forms the noun तहज़ीब/تھذیب, culture, which exhibits the absence of the doubling of the consonant typical of verbal nouns belonging to class II and the nominal infix -ई- between element 2 and 3 of the root. In the same way तंज़ीम/تنظیم is derived from नज़म/نظم and तालीम/تعلیم (= त+अलीम) from इल्म/علم. The expected doubling of the middle consonant is again visible in the passive participle of the root हज़ब/ ھذب: मुहज़्ज़ब/مھذب, cultivated, well behaved. Just as in the case of मुनज़्ज़म/منظّم  above, the trisyllabic structure of the resulting word causes the absence of the infix -ऊ- between element 2 and 3. An active participle of this class is represented by मुअल्लिम/معلّم, teacher; based on the root इल्म/علم.

Class III: the inherent vowel following the first element is lengthened to ā. Meaning: reciprocal, indicating the attempt of performing the action described by the root.

Structure: 1–2-3. The active participle of सफ़र/سفر is मुसाफ़िर/مسافر travelling, hence the traveler; consisting of the prefix मु- to be expected from a participle of class III, -सा- the lengthened inherent vowel of element 1 and -फ़िर, the इ infixed between element 2 and 3.

Class IV: an a is prefixed to the root and the inherent vowel between element 1 and 2 is removed. Meaning: causative. Note that the prefixed a is always pronounced i in Arabic and written thus in Urdu and Hindi.

Structure: a12-3. From the root करम/کرم, इकराम/اکرام, meaning honour, is formed. इकबाल/اقبال, prosperity, is formed in analogous manner on the root कबल/قبل.

Structure: ta1-22-3 From the root अलक/علق the noun ताल्लुक/تعلّق, relation, is formed. The form consists of the prefix त-, the intensive, class II, stem and the infix -उ-, which is characteristic of sign of nouns formed on the pattern of class V. Analogically the noun तसव्वुफ़/تصوّف , mysticism, is formed on the root सवफ़/صوف, which is also at the origin of the word सूफ़ी/صوفی. The word तकल्लुफ़/تکلّف  is also a formation belonging to this class. The root कलफ़/کلف is otherwise not very productive.

Structure ta1–2-3. There are no really common examples for this class in Urdu.

Class VII: in is added to the bare root. Meaning: passive of class I.

Structure: in1-2-3 Following the rules of stem formation of this class इंकिलाब/انقلاب, revolution, is formed from कलब/قلب, meaning heart. The इ between element 1 and 2 is of similar origin as the same sound in the word इल्म/علم, which reflects the Arabic pronunciation of the root अलम/علم. The word इंसराम/انصرام, administration or management, also belongs to this class. Its root सरम/صرم has no meaning on its own. From the root अकस/ عکس, reflection or light, the class VII noun इनिकास/انعکاس is formed, which also means reflection.

Class VIII: i is prefixed to the bare root and t is infixed after element 1. Meaning: reflexive of I.

Structure: i1t-2-3. From नज़म/نظم , इंतज़ाम/انتظام  is formed containing the slight irregularity that the vowel between element 2 and 3 is lengthened. Apart from this it consists of the expected elements: prefix इ- and the infix -त- following element 1. Adding the prefix मु- to the same stem, in which case the prefix इ- is lost, and the infix -इ- between element 2 and 3, results in the active participle मुंतज़िम/منتظم , the one who organises, i.e. the manager. Also with a lengthened vowel between element 2 and 3, there is also the very common word इंतज़ार/انتظار , formed from the root नज़र/نظر, which literally means looking out for, hence wait. When the active participle of the same root is formed by prefixation of मु- and infixation of -इ- between element 2 and 3, the class-prefix -इ is dropped, resulting in the form मुंतज़िर/منتظر, the one who is waiting.

Class IX does not exist in Urdu.

Structure: ista1-2-3 The very common word इस्तमाल/استعمال, use, is a formation belonging to this class. Its root अमल/عمل  means work or action. The class I active participle आलिम/عالم is the one who works.  From the root कबल/قبل, the noun इस्तिकबाल/استقبال, reception or welcome, is formed.

At Zabaan we run regular Urdu Script classes introducing the beautiful Nastaliq script to students who are new to the language and, additionally to teaching Urdu from basic to advanced levels, we also offer instruction in the two main source languages of Urdu: Farsi and Arabic.

If you have any more examples for Arabic words based on these patterns or questions concerning Arabic words you use in daily life please leave a comment or contact us on Twitter @SAZabaan. We will be most happy to retweet your comments to further the understanding of Arabic words used in Urdu and Hindi.