Under the garb of a lawyer par excellence lies a heart that beats for the composite culture of India and its literary and cultural traditions.

Sidharth Luthra, Senior Advocate at the Supreme Court of India, is well known for his passion and knowledge of law, but few know about his fondness for the Urdu language, and its poetry and literature.  He inherited this affinity from his father, the late Senior Advocate Mr. K. K. Luthra, a native Punjabi speaker who was fluent in Urdu, Persian, and English and literate in Arabic. 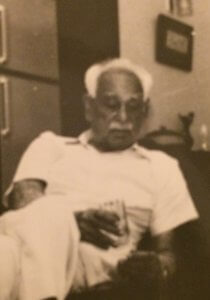 Mr Luthra’s father’s and mother’s family moved to India from West Punjab after the partition in 1947 and his grandfather was alloted agricultural land in Indian Punjab after a few years. “We speak Punjabi at home, but our spoken dialect is different from the Punjabi of Eastern Punjab”, he remarks while talking about his family’s journey to post-partition India, “My grandfather would write to his staff on our farm in Bhatinda (now Mansa) in Punjabi but in the Shahmukhi script. And my father used to make his case notes in Urdu or English. I still have his old registers with his notes in Urdu”, he adds.

Ever since childhood, Mr. Luthra has seen Urdu used for work and for personal communication in his family. And while his own use of Urdu was limited he greatly desired to learn the script that both his grandfather and father had mastered. “I bought a book to learn the Urdu script when I was in college”, he recalls, “but my attempts didn’t work”. Nastaliq, the script for writing Urdu, is indeed a complicated writing system. It does not promptly divulge its secrets to learners. 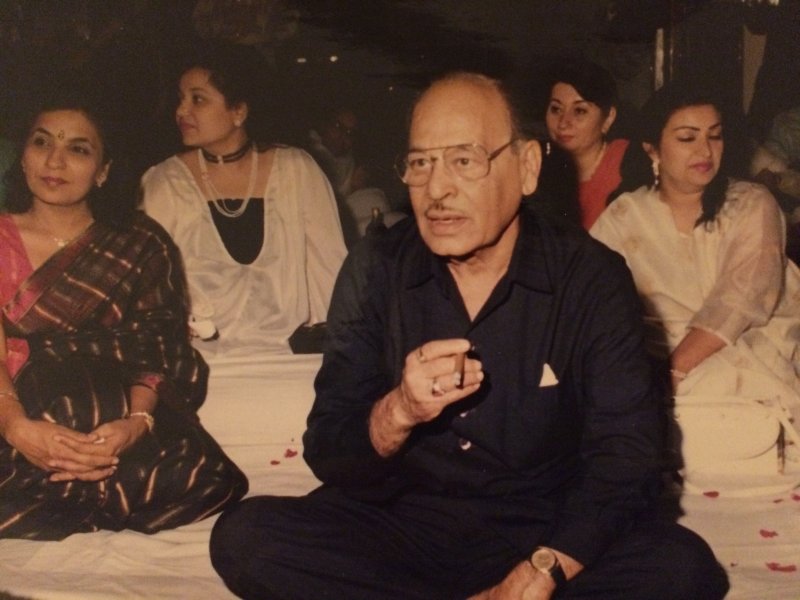 Mr Luthra’s father Mr K K Luthra
However, this desire to learn to read and write the Urdu script lived on in his heart. “In 2013, my wife Ketaki showed me an article about the Urdu Script course at Zabaan in the Brunch Magazine. I got interested, made a few enquiries, and decided to attend the course”, Mr. Luthra recalls. He attended the five lessons of the course and then continued on by taking private lessons with the teacher Ali Taqi for several months. He recounts his experience of learning with Ali fondly, “Learning with Ali was a great experience. He shed light on the finer details and nuances of the language and even the history of the alphabet, which made the experience fascinating.”

Many of his friends were intrigued by this commitment to learning Urdu given his hectic work schedule. He was at that time Additional Solicitor General of India at the Supreme Court. “For me, it was a good opportunity to connect with my family’s heritage”, he says. When the senior Mr. Luthra was alive, mushairas (poetry-meets) and Indian classical musical performances were commonplace at their home. He recalls, “My father had a phenomenal memory and was very fond of literature, he could quote Shakespeare by heart and also knew a large number of couplets in Urdu and in Persian. He was particularily interested in Urdu and Persian poetry and literature – I still have few of his books.” 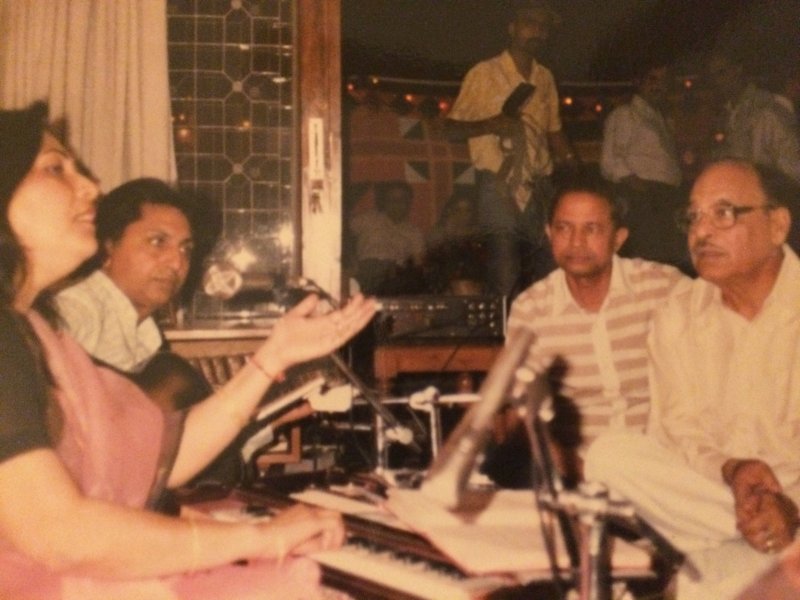 Mr K K Luthra with the late Urdu poet Izhar Asar behind him to his right at a ghazal recital at his residence
Mr. Luthra feels that learning and understanding Urdu has opened a window into his family’s lost heritage, “It was a revelation”, he remarks contemplatively, “I now know the meaning of many of the words my grandfather and father used to use.” Being a heritage Urdu speaker himself, Mr. Luthra could understand the meaning of Urdu words through context, but his Urdu lessons taught him the precise meanings and origins of the words he had been hearing since his childhood. He is now eager to read the Urdu books and personal letters in his father’s collection. He would also like to use his knowledge of Urdu to revisit the ghazals he learnt as a boy while training in Indian classical music for more than seven years.
Now that Mr Luthra has learnt the Urdu script, his next goal is to start learning Persian so that he can read the original text of Zafarnama, a missive from Guru Gobind Singh to the Mughal Emperor Aurangzeb. He has read the English translation by Navtej Sarna and loves its crispness, and its powerful message and moving oration – it is, in fact, one of his favourite books.

He also wants to learnt Sanskrit one day.  As an Arya Samaj follower, he already recites Sanskrit mantras with ease and hopes to master the language someday soon.  As he comes from a family of polyglots, and himself speaks Hindi, Punjabi, Urdu, English and (passable) French, it will not be surprising when one day he fulfils his dream of learning Persian and Sanskrit as well. 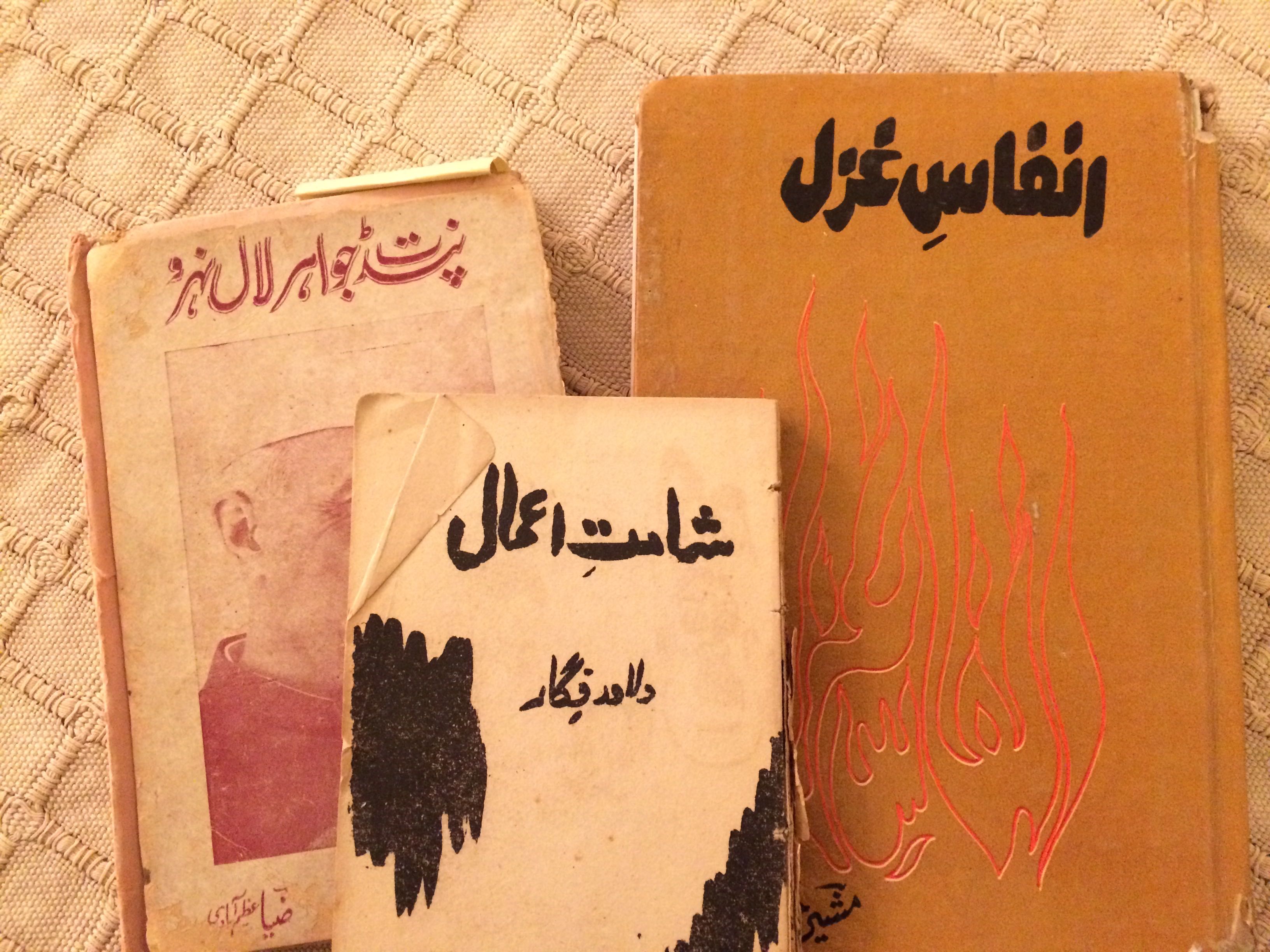 Some of Mr K K Luthra’s Urdu Books
Mr. Luthra’s family clearly imparted to him a love for languages, literature, music and culture and above all bestowed on him a sense of pride in who he is and where his family comes from. He does not talk much about partition days, but it is quite evident that he greatly admires his family and especially his parents for all that they were able to accomplish in spite of the circumstances. His father earned an MA in English Literature and another MA in Journalism before obtaining his law degree, while his mother aged 91 is a retired academic from the University of Delhi and continues to be an avid reader with an eclectic taste, from politics to fiction and spirituality, both in Hindi and English.

Talking about the origin of Urdu Mr Luthra says, “Urdu was born because there was a need for a common medium of communication between different sections of the population and those who governed the society and were in charge of administration.” For someone who has witnessed the process of assimilation first hand, it is almost intuitive to see how the migration of people and their languages leads to the creation of new ones.

It is also no surprise then that Mr. Luthra has encountered the Urdu language not just in high literature and music, but also in several legal records from pre- and post-partition that pertain to common people. Recounting his exhilaration at reading these records Mr. Luthra says, “The satisfaction of reading them in the original is unmatched.” 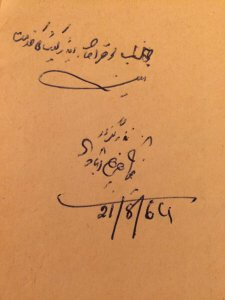 Other Hindi speakers who learn Urdu also go through a similar experience. The text written in Urdu, barring a few words, is almost fully comprehensible to them. The only tricky part is decoding the script. Mr. Luthra believes that once Hindi speakers master the script, learning Urdu will come easily to them. Based on his own experience, he comments, “Hindi speakers can easily contextualise new Urdu words. The only real challenge is not lapsing into the tendency of using Hindi words in Urdu, and instead continuously work towards on building a strong Urdu vocabulary.”

Yet despite the efforts of intellectuals, students and heritage speakers like Mr. Luthra who are trying to revive their centuries-old connection to Urdu, the great poetic and literary traditions of the language are slowly becoming obsolete in modern India as the country is reinventing itself in the 21st century. Mr. Luthra feels that we are at risk of losing this part of our heritage as the generation fluent in Urdu is passing away. An observation that echoes the feelings of admirers of Urdu today.

Many people now commonly think of Urdu as a language belonging to the Muslim community, a historically inaccurate assumption that Mr. Luthra dismisses outright. He explains, “The spoken language in north India was Hindustani which was a mixed language. Apart from Central India and Hyderabad, the Muslims in southern and eastern Indian states speak, read and write their own regional languages – Urdu is not their spoken or written language, thus treating Urdu as relatable to the Muslim community alone is unwarranted.”

Today many of us struggle with the differences and apparent contradictions between the many languages and cultures in India, but Mr. Luthra has turned this rich cultural heritage into one of his key strengths. Being multilingual comes naturally to him; he can easily switch from Hindi to Punjabi to Urdu to English and then back to Hindi in any conversation depending on the comfort of the person he is speaking to. Through his magnetic persona and his extensive scholarship, he inspires us to emulate his example and rediscover our heritage with an open mind and heart.

The Language of Love

A Historical Primer on Urdu