Second Language Learning Boosts Your Brainpower… Yes It Really Does!

Every second language learner starts learning a language with an aim. Some learn out of interest, some do out of compulsion, but no matter what one does, what their purpose is, the one thing they definitely do is change their brain in a certain manner. For years, research has been carried out to differentiate between how a bilingual brain works differently to the monolingual brain. This tells us about how the cognitive processes in our brain change with the amount of the languages learned, i.e. the bilingual brain is better at things like working memory, reasoning tasks, flexibility, problem solving etc. Thus learning a language or acquiring it enables our brain to perform general tasks better. It even equips our brains to gain a better aptitude by at least enhancing one part of it, which is called the frontal area or frontal lobe.

As a teacher of a foreign language, one can easily see how different kinds of people learn languages in different manners. How one person can learn a language much faster than another, how some produce what’s learned quicker than the first etc. Some know based on their previous learning experiences what learning a new language takes while others don’t. People often try and associate their physical age with the age of their brain and their language learning capabilities. But that is certainly not true because learning something, be it a language or something else, involves mental age rather than physical. Mental age is directly proportional to physical age and, if anything, its functionality- though it has its limitations- increases with the physical age of a being and strengthens with growing age. Even linguistic theories tell us that our brain’s language learning capabilities are not affected by physical age after the age of seven. Of course the age would hamper one’s abilities to learn a language if it leaves one with dementia or something similar.

One’s brain progresses slowly with the acquisition of each level of a language learned. The core part of this learning process is the basic level which is also the most difficult for most learners, given the amount of the grammar rules one needs to think and learn about. But this certainly helps one to understand their own language better. Like the layers of earth when this core starts solidifying, one moves to the intermediate level. There they are required to cover this solid core with a viscous layer of information to complete the process of solidification of the core and move onto the crust level, i.e. the advanced level, which lends a helping hand in crystallising the previous one, and so it continues. This undoubtedly helps in developing one’s basic subject skills like Math, Social Studies and Science etc.

Bilinguals can label everything with two names. Therefore, they have the ability to use one tag over another, differentiate between the two in different situations, associate which word tag associates with which language label etc. We can have a look at the learning process in the following representation: 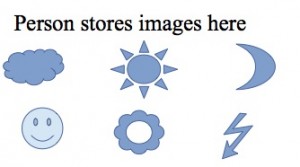 Every time a person retrieves a word label from the language memory store, he/she has to weed out the unrelated word label. This technically enhances their intellectual skills. All these abilities which are given to us by learning a second language virtually increases our brain space and also densifies its grey matter. This brain activity helps increase IQ levels and thus learning a language also causes a delay in onset of dementia in many cases.

Consequently if you are educated in two languages, be they the ones that you acquired or that you learned, you can think of a word under two different labels virtually every time and retrieve the one relevant to you in the given situation. Thus, learning a second language hones your everyday intellectual skills, sharpens your ability to comprehend, grinds dexterity, ingenuity and readiness.

So to keep your brain, healthy, active and young, hit the books and flex your corporeal muscles!