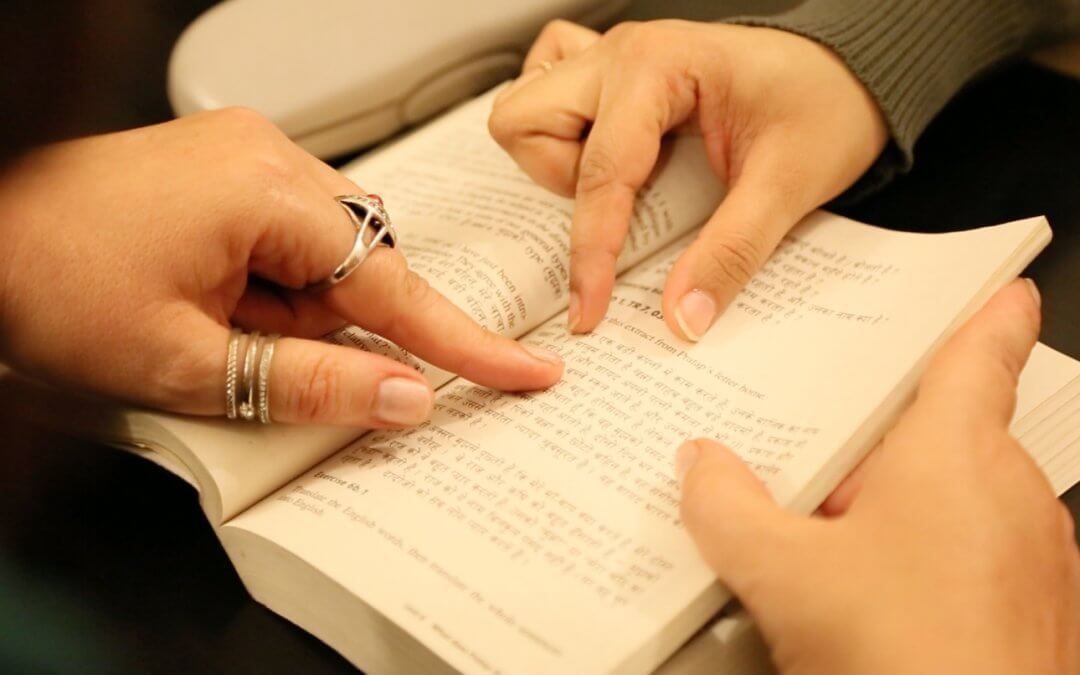 In the previous installment we looked at a few examples of how Hindi sentence structure differs from English. Let’s take a closer look at some specific examples of concepts that are expressed differently in Hindi:

The verb ‘to have’ is a common to most languages, so many students are surprised to discover that ‘to have’ does not exist as unique verb in Hindi. Sanskrit, similarly, does not have a verb equivalent to ‘to have’ and uses the genitive case for the subject.

Rather, to express that the subject possesses an object, the verb ‘to be’ is used, while the subject is placed in one of three cases detailed below.

One way to understand the absence of this very important verb is to investigate what the action behind the verb ‘to have’ really is. When we ‘have’ something are we actually ‘doing’ something? Is the verb ‘to have’ in the same category as action verbs such as to eat, to sleep, to walk, to sit, and so on? It’s not. To have something describes a state, not an action.

For a Hindi speaker, when the subject possesses something or someone, the subject is expressed in relation to the thing or person that exists i.e. is. This relationship is marked by a postposition following the subject (a postposition has the same function as an English preposition). As mentioned above, in Hindi, there are three possible scenarios.

Notice that in these examples, एक भाई है, ek bhai hai, एक कॉपी है, ek kaupi hai, बुख़ार है, bukhaar hai, these phrases just state that ‘a brother is’, ‘a notebook is’ and ‘fever is’ while when the subject is followed by one of the three postpositions above, a relationship is defined between the possessor i.e. the subject and the possession i.e. the object.

II. Likeability: One does not like something, rather something is ‘likeable to’ one

In Hindi, like in Sanskrit, the idea of liking is expressed using ‘likeability’. Thus, if the subject likes something or someone, it is expressed as follows:

The thing or person is likeable to the subject

I like biryani. → Biryani is likeable to me. → मुझको बिरयानी पसंद है।, mujhko biryani pasand hai.

He does not like driving. → Driving is not likeable to him. → उसको गाड़ी चलाना पसंद नहीं।, usko gadi chalaana pasand nahin.

Like the verb ‘to have,’ the English verb ‘to feel’ is also viewed differently by Hindi speakers. When one ‘feels’ hot, cold, tired etc., the subject in Hindi is a ‘patient’ of an illness, emotion or bodily sensation. “Heat strikes me.”, rather than “I feel hot.” or “Sleep comes to me.” rather than “I feel sleepy.”

Interestingly, almost all bodily states and such processes are viewed as things that happen to the subject or its body. There is not much role for the subject as an active agent in these sentences.

Some other examples are:

It is interesting to note that these constructions for ‘feeling’ and ‘liking’ that we have discussed above work in the same way in many other Indian languages.

While को, का/की/के and के पास are used to construct the Hindi verb ‘to have’, sometimes में, mein and के अंदर, ke andar are used when the thing the subject has can been seen as being inside them.

As mentioned above, the English verb ‘to feel’ is generally translated by ‘लगना, lagna – to be attached, to strike’ in Hindi.

However, when the subject ‘feels like doing a verb,’ it is viewed as the subject is being controlled by his/her mind (मन) and indirectly, his/her sensory organs. They themselves are not in control. So the Hindi equivalent is:

VI. Obligations also happen to someone, and require the use of ‘को’

Like with the verb ‘to have,’ obligations and compulsions are situations in which the subject is helpless. In these cases, they become a patient to whom the action of obligation or compulsion takes place.

VII. Voluntary vs. Involuntary: Did I miss my class deliberately, or because of circumstances?

Hindi speakers maintain a clear distinction between actions they perform of their own volition and actions that happen because of circumstances. In the example sentence in English we had:

I have missed many classes.

Here, it is unclear whether the person missed them intentionally or not. However, from the context we can gather that it was not intentional.

In Hindi this sentence can be translated in two different ways as follows:

The first sentence can be used only when one misses classes deliberately. If one has had to miss one’s classes because of some other reason or obligation, or even by mistake, one would say ‘my classes were missed.’

In all these examples, the action of the verb takes the centre stage and defines the relationship that the other parts of the sentence have with each other and with the verb.

This phenomenon is observed in some participial constructions as well. For instance, if you want to say, “I have read this book, you can take it.” in Hindi one normally encounters:

ye kitab meri padhi hui hai. Tum le lo. This book is characterised as me having read it. You can take it.

In this sentence the focus is on the book—the book is in the state of having been read. The fact that it was read by the subject is relegated to a secondary position, as the possessor of the participle verb.

Thus, while one can learn the various constructions which require the subject to take a postposition, it is somewhat challenging to do so, as there are so many grammar rules.

From the perspective of Hindi students then, what might help more is a unifying explanation that can explain all these situations where the action, or another part of the sentence (like the object), is being stressed upon more than the subject.

In the third installment of this blog series, we will present one explanation for this phenomenon, which to us seems to be the most likely one.